Experience a blend of culture and entertainment with boat races 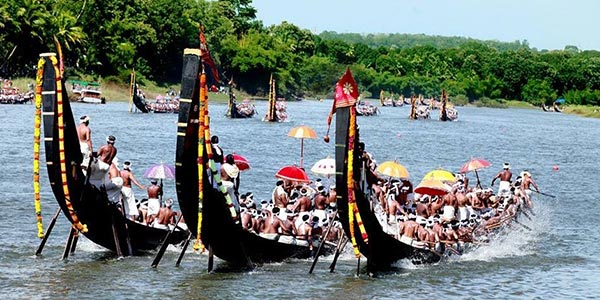 The Aranmula temple is situated in the Pathanamthitta district of Kerala, around 130 kilometers from the city of Trivandrum. It is believed to be standing over the banks of River Pampa from an impressive 1700 years. The temple was built in honor of Lord Krishna and Arjuna.

It hosts a lot of grand festivals and events throughout the year, the most famous and significant one being the Palliyodam regatta or the grand Boat race. However, it is interesting to note that those races are not as competitive as they are conducted as a part of religious beliefs and rituals. More than that, it is a tradition celebrating the birth of Arjuna.

Aranmula boat race is believed to be amongst the oldest traditions of Southern India. It is held during the grand festival of Onam (Festival in Kerala) in the months of August and September. 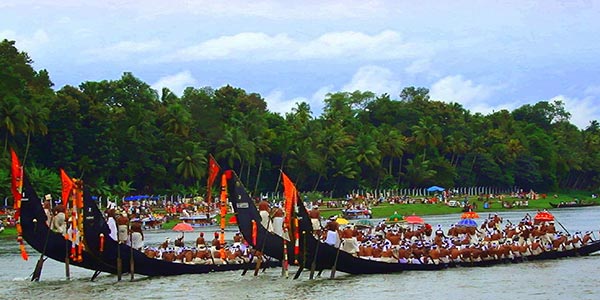 The most important and worth-watching part of the entire festival is the snake boat race. However, such races were not a part of the festival until the year 1972. Colorful wooden boats can be seen at the race, which has an expansive size ranging around 100 to 140 feet. The rear part reaches up to a height of 20 feet. A snake-like appearance is achieved this way which gave rise to the name 'snake boat.'

They are adorned and decorated in an aesthetically pleasing way using golden laces at the head, flags, and heavily ornamented umbrellas in the center. This is what gives the boats a distinctive look as they all are prepared for the race. They are named after the particular villages and maintained every year so that the wood remains strong and the boat is able to withstand the water.

While rowing the boats, the Oarsmen sing traditional South Indian boat songs known as Vanchipattu. They wear turbans, and the traditional mundu which refers to a white or cream colored cloth wrapped around the waist. The coordination of the men rowing the boat along with their songs combines to create a sight that truly proves to be a visual delight to a large number of visitors who assemble at the banks of the River Pampa. 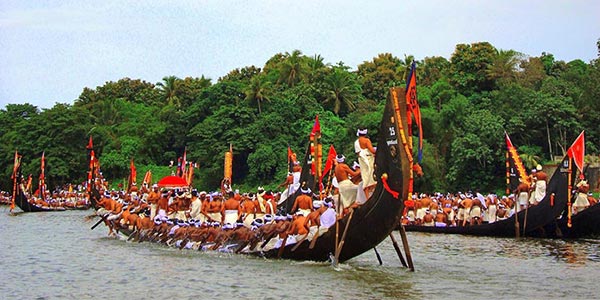 Special boats from Kattoor arrive at Aranmula on the Thiruvonam day. The boat proceeds with the speed of the water current. The Brahmins, along with the oarsmen, carry meals for Lord Arjuna and an ever-burning lamp to Aranmula. It is truly a sight worth watching. The musical sounds of Nagaswara (flute pipe) are known to attract people as lots of people gather at the riverbanks to witness the procession of the boats.

Although the boat race is the biggest attraction, other grand festivals and events are held at the Aranmula temple. These include serving authentic South Indian Onam feast to the oarsmen at the Parthasarathy temple, which is popularly known as Aranmula Vallasadya. A wide range of delicacies is presented in front of them as a part of the festival.