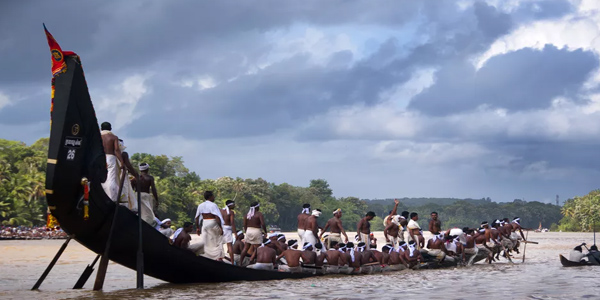 Kerala, the southernmost state of India, is well known for its rich culture and traditions. The state has acquired the name, God’s Own Country, for being a majestic and beautiful place. Kerala is blessed with great geography; it is surrounded by the Western Ghats and the Arabian sea with multiple rivers flowing through the various towns and villages of Kerala. The backwaters are dominated by the houseboats which are one of the most famous tourist attractions of Kerala.

When one imagines Kerala, they see the backwaters, the abundant banana trees, stills from Malayalam movies, women dressed in the white coloredsarees with a golden border, which are also known as Kasavusarees in the state and the jasmine gajrathese women wear on their heads. One of the most popular images you may have witnessed is of hundreds of men rowing a long boat; this is the image of the immensely famous Snake boat race in the Kerala.

Snake boat race in the Kerala 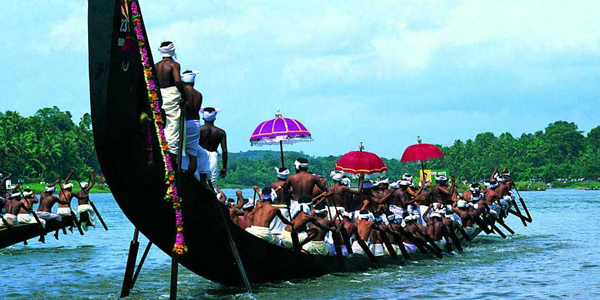 The Snake boat race in the Kerala resonates across Kerala, they combine the natural beauty of the region with the energetic and exuberant people of Kerala. The Snake boat race in the Keralas are held in the Malayalam month of Midhunam, which is roughly sometime in the months of June and July. Champakulam Boat race is one of the oldest races of this type. This race kickstarts the season of boat races all over Kerala. The Champakulam boat race is held in Champakulam, in the Alappuzha district of Kerala. The boat race which is held on the river Pampa attracts a massive crowd to the river on the day of moolam according to the Malayalam calendar.

History of Snake boat race in the Kerala 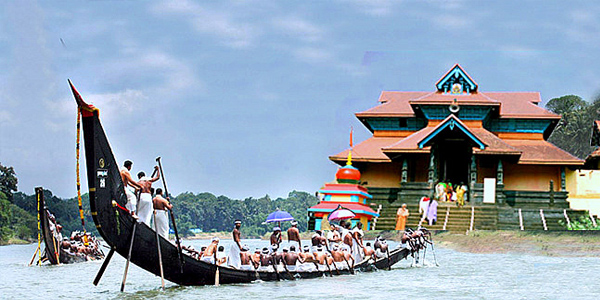 The boat race is held on a specific day every year for it follows a legend. The legend is believed by many and is of religious significance to the Hindus of Kerala. The boat race started sometime in the 1545 A.D., and the legend originated from that time too. The Raja of Chempakassery, Devanarayanan, built a temple in Ambalapuzha since the royal astrologer suggested him to do so. Before the deity was installed in the temple, it was brought to his notice that the idol wasn’t auspicious. This made him look for an idol that was suitable, as soon as possible. The priests told him about the idol of Lord Krishna, in Kurichi at the Karikulam temple. It was believed that this idol in Kurichi was the given to one of the Pandavas,Arjuna, by Lord Krishna. This made this idol holy and sacred. This Raja’s men went on boats to Kurichi to get this idol and, thus, on the return journey, the men stayed in Champakulam for the night at a Christian household of Itty Thommen, who was a confidant of the Raja. The next day, followed by his entourage, the Raja came to Champakulam. The idol was worshipped by all with pujas done by the Raja and the people of Champakulam. The Raja was pleased by the treatment he received from the people of Champakulam and the idol on their stay and thus declared a water carnival would be held every year in the river water of Pampa, in Champakulam. This boat race in Champakulam commemorates the boat racing festival all over Kerala. Mithunam was the day when the deity was installed at the Amabalapuzha temple. 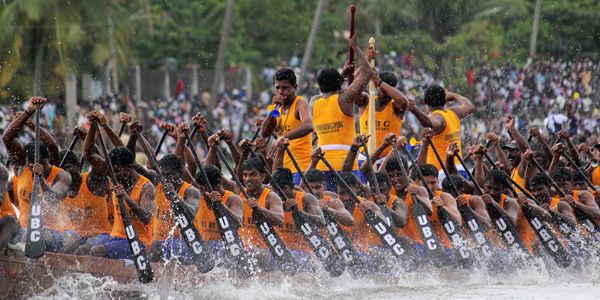 The boat race is the time when the people of Kerala get together and scream and yell at the top of their voice to cheer for the men rowing the boats. Religion is no bar to participate in the Champakulam boat race. Although this festival was started mainly by a Hindu Raja, people of all religions celebrate this boat festival. The event starts in the afternoon when a number of boats from various nearby areas gather at the starting point. The participating teams carry a procession to make people familiar with the teams. This procession is followed by a cultural show which includes traditional dances and music. There are several types of boats that participate in the race, the famous one is the snake boat, while there are others including the Veppu, Churulan, Iruttukuthi, etc. Each boat type has its own race. Each boat has four helmsmen, over a hundred oarsmen who row together at the fastest rhythm to the song of oarsmen (Vanchippattu), which 25 singers on the boat sing. They are cheered by a huge crowd of people who come from far of places to cheer for these boatmen and to see this wonderful sight where all oarsmen work in unison and try to get ahead of the other boats.

Once the boat race commences, the men start singing, and the oarsmen coordinate with one another and race towards the end. These men practice throughout the year in order to participate in this race. The race winner gets the Nehru Trophy. While Pt. JawaharLal Nehru was the Prime Minister of the country, he had come to Alappuzha on one such snake boat, and he gave a medal to the winning team. Since then, the people celebrate the winning team by giving them the Nehru trophy.

There are many clubs and associations that take part in this boat race, and there is a lot that goes behind these races. Many associations have now started funding these boat races. This not only gives financial aid to the teams but also encourages them. Many people are promoting the oarsmen of Kerala to do better and train all throughout the year in order to send them to the Olympics for water sports.

Locals are hired by the clubs for the practice days, and then they train and feed them as well. The clubs also hire coaches who shape and sharpen the skills of the part-time oarsmen. At the end of the day, this event brings the villagers closer and give them an identity on an international level, for there are many tourists who come all the way to Kerala just to see these men rowing boats. This creates a sense of pride and happiness amongst the men and women of the state of Kerala.