Neelamperoor Padayani: A festival of nature and celebration of effigies. 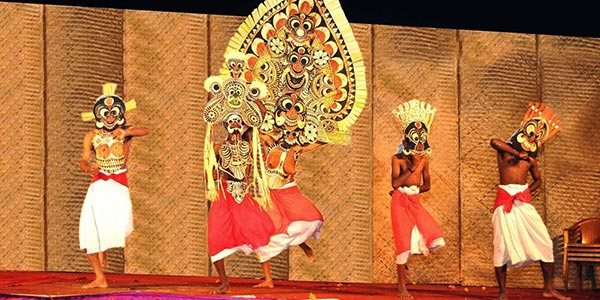 Neelamperoor Padayani is a festival in Kerala which is celebrated in the month of Chingam for almost 16 days. It is celebrated in the Neelamperoor Palli Bhagavati Temple which is one of the oldest temples in Kerala and was built between 250-300 AD. It is believed that this festival is being celebrated as a remembrance of the Buddhist monk Perumal's visit and his contributions for starting Padayani in Neelamperoor. Also, this festival is said to be a link between Hindu and Buddhist culture as it represents a blend of both religion's cultures. 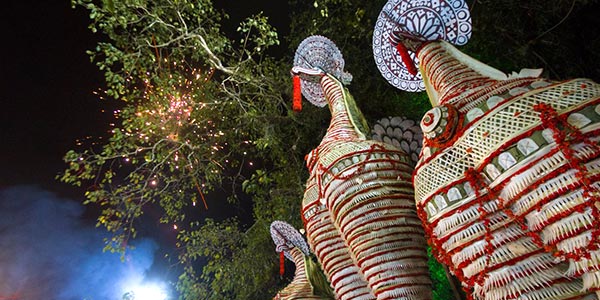 Padayani is a kind of event that consists of dance with face masks and headgear, though Neelamperoor Padayani is different from it as it consists of effigies of humans and nonhuman figures. The Neelamperoor is often referred to as the festival of nature as there is extensive use of natural substances for making effigies. These effigies are made by using natural plant materials such as stem, leaves, etc. The stem of areca nut tree, the stem sheath of banana plants, lotus leaves, Chethi flowers, etc. are some of the widely used plant materials in the making of effigies. Also, the place where the Padayani is performed has a close association with the natural environment which is free of pollution and city life. This is because most areas of Neelamperoor village is occupied by the agricultural wetlands. The traditional name of effigies is kolams. Thus the Neelamperoor Padayani is also called Kettu Padayani which actually means Padayani of making Kolams. The major religious events taking place in this festival are Choottuveyppu which is the lightning of the fire, usually performed for the first 3 days. Kudampooja kali, Thotakali and Velakali are the ritual dances in which people move in circles around the campfire and sing. Pacha, Plavila Nirthu, Kuda Nirthu, etc. are the other ritual events that occur during the 16 days of this festival.

What are the different types of Kolams that are involved in Neelamperoor Padayani? 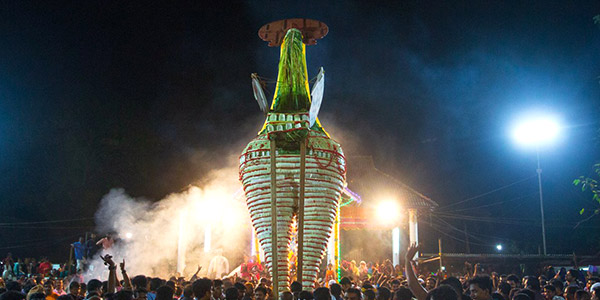 There are in all 13 compulsory Kolams known as adiyanthira kolams which are available in different dimensions and structures. It is found that for the first 8 days of the festival the kolams are of two dimension and they are of three-dimension for the other days. Along with the compulsory Kolam, subordinate Kolams are also made. The figures of these subordinate Kolams comes to a wide variety, such as animals, abstract ritual objects as well as puranic characters. There is a courtyard in front of the Neelamperoor Palli Bhagavati Temple which is used as a stage for events and activities of this festival. The Kolams are made and displayed here as well as other ritual activities being performed.