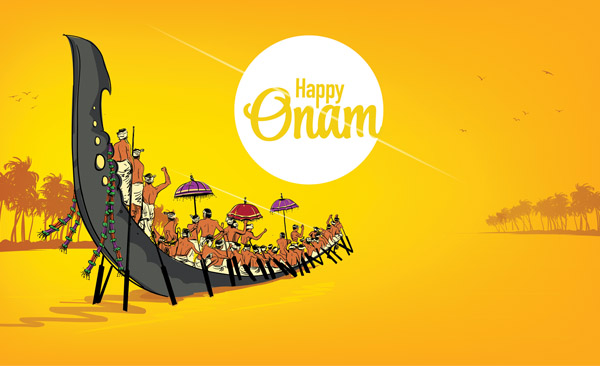 Kerala the southernmost state of India is well known for its rich culture and traditions. The state has acquired the name Gods own country for being a diverse and beautiful state in India itself. The state is blessed with a great geography the state is nurtured by the western ghats and the sea with multiple rivers flowing through the multiple town and villages of Kerala. The backwaters are dominated by the house boats which are one of the most famous tourist attractions of Kerala. When one imagines Kerala they see the backwaters the abundant banana trees stills from Malayalam movies women dressed in the white colored sarees with a golden border which are also known as Kasavusarees in the state the mogras these women wear on their heads. You will also imagine men wearing tiger masks dancing along with a huge variety of food served on a banana leaf. Most of these images you have in your brain are all seen in Kerala on the days of Onam. Onam is the festival where you will see a lot of woman in the state wearing such sarees. It is traditionally the Hindu festival of Harvest. Onam falls in the month of Chingam which technically is the first month of the Malayalam calendar and usually overlaps with the months of August and September according to the Gregorian calendar. Over the centuries it has come to be celebrated for a variety of reasons. One of them primarily being the rice harvest. However there are a lot of legends attached to this festival the most well known and most interesting one is the legend of the Mahabali.

Story behind the celebration of Onam 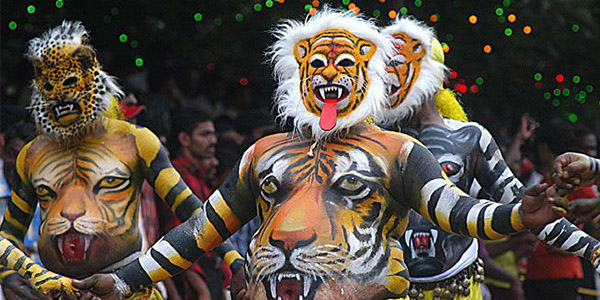 According to old Hindu texts, Mahabali was the great great grandson of Kashyapa, a great Brahmin sage and the grandson of Prahlada, who was a Vishnu devotee. Mahabali came to power after defeating the Devas took over the three worlds. He led a prosperous rule and was an ardent devotee of Lord Vishnu. Once Vishnu decided to test Mahabali by taking the form of a dwarf boy called Vamana. Mahabali had announced that he would be performing Yajna (home sacrifice) and grant anyone any request. When Vamana approached Mahabali, he was asked what he wanted. Vamana claimed that one should not ask for more than they needed and only asked for 3 footsteps of land and Mahabali agreed. Vamana grew extremely big and covered whatever Mahabali owned in two steps. As for the third step, Mahabali offered himself an act which was accepted as devotion for Vishnu. Hence, Vishnu gave a boon to Mahabali according to which Mahabali could visit his land and people once every year. This visit of Mahabali marks Onam, a reminder of his prosperous rule and his humility in front of the Lord Vishnu.

Another simpler form of this legend is found in the Rigveda, which describes a deity with the powers of Vishnu and Bali is a metaphor for sacrifice, an offering made to the Gods after a bountiful rice harvest.

The celebrations of Onam 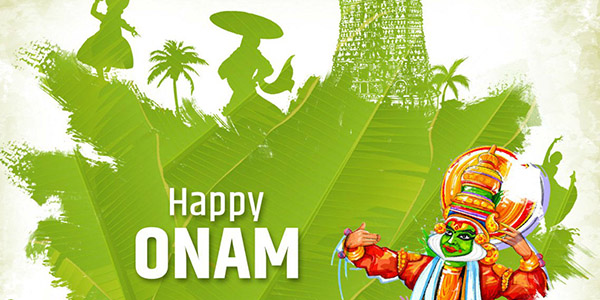 Onam is a ten days long festival, where there are celebrations on all 10 days. There are various highlights of the celebrations of Onam, where all men, women and children of the family have some work to do and contribute to the beautiful festival of joy and gratitude. The first nine days of Onam are devoted in preparations for the tenth day of Onam which is when the Onasadya takes place. From the very first day of onam, which is the Atham, the women of the house start making a design in front of the gate of their houses. This design is made by using a variety of flowers, with every passing day of Onam, layers of flowers are added to the existing design, by the tenth day, this design is huge and looks grand in front of the house. This art of making a design with flowers is called Pookkalam, this is a practice that is constant on all ten days of Onam. Along with designing verandas with Pookkalam, many college and schools in Kerala have Pookkalam competitions to encourage the art.

On the first day statues of King Mahabali and Vamana are brought to the houses and installed. The second day, i.e. Chithira people start cleaning their houses, while on the next day, the Chodi, the families go out for shopping and buy gifts for close family. The fourth day, the day of Vishakam is when many places start competitions like the Pookkalam and folk dance competitions. The Anizham, is the start of the Vallamkali Boat Races or the snake boat races in most parts of the state. These boat races are country wide famous, with certain boat races have trophies as a prize, like the Nehru Trophy Boat race. These are held in the backwaters of Kerala, where hundreds of boats lines up at the starting line, with hundred to one-fifty men per boat, where 20 of them sing and the rest row the boat in perfect coordination. This is a sight one should not miss at all, the coordination between the men is wonderful to see, especially how they all swiftly row the boat to the finishing line. There are thousands of people standing by the banks to cheer these men, while the men row the boat for which they practice for at least three to four months.

The six day of Onam, i.e. the Thriketa, is when most schools and colleges get a holiday and the whole household is devoted to the preparations and celebration of Onam. The Moola, which is the seventh day of Onam is when most places start preparing for the Onasadya, and the folk dancers and singers start preparing for their performances, the shopping continues. The next day, which is the Pooradam is when the idols of Mahabali and Vamana are cleaned and washed, after which they are placed in the middle of the Pookkalam, diyas and candles are also kept on the edges and sides of the Pookkalam. The Utharadom, i.e. the ninth day of Onam is when the whole household is busy preparing for the big day of Onam, the family starts preparing the meal for the Onasadya, along with packing gifts for the relatives. By the end of the ninth day, most of the preparations are done for the celebrations of the tenth day.

The tenth day is the Thiruonam, which most people identify as the day of Onam, people take bath early in the morning and dress up, there are prayers offered to the god and the Pookkalam is completed by adding the final touches and placing candles and diyas in and around it. The Onasadya, that is the nine-course meal is served on a big banana leaf. There are various types of vegetable dishes served like the yam, ash gourd, avial, cucumber along with rasam, rice, several types of curries, papadam, chutney, curd, buttermilk, pickles, etc. All of this is topped with a variety of sweet dishes with Payasam and its various types finding their way onto every plate. The other sweets are the unniyappam, vattayappam, elaada, pazhampori, etc. The meal has around 30 items, and there are restaurants who offer even more items in a platter on the day of Onam. There are many things to do, dances performed by many people, some sing folk songs and some dance the folk dances like the Kaikottikali, which is performed by women to praise King Mahabali; the Thumbi is performed by women as they dance round in a circle. Puli Kali is another folk dance performed by men by wearing tiger masks and painting their bodies like that of a tiger. People decorate elephants by making them wear ornaments and jewelry for the procession of elephants which mainly happens in Thrissur and Kochi.