Celebrate the monsoon festival of Teej with the rich culture and traditions of Rajasthan. 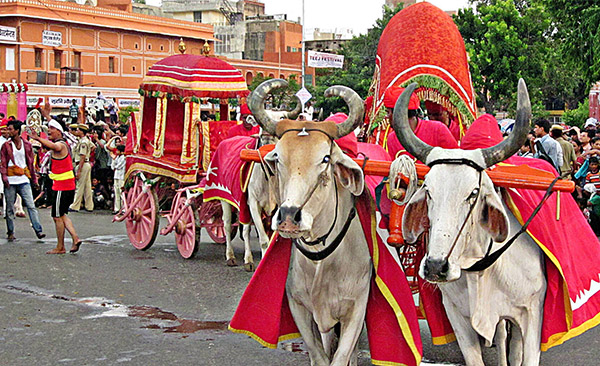 The festival of teej celebrate the abundance of the mother nature, chirruping of birds and other social activity, the coming of clouds and rain and Hindu rituals and customs. This festival is for women which include getting together with fellow friends and telling fun stories, getting dressed up singing, dancing, wearing red, green or orange dresses, eating and sharing festive foods, swinging by the tree and playing there. 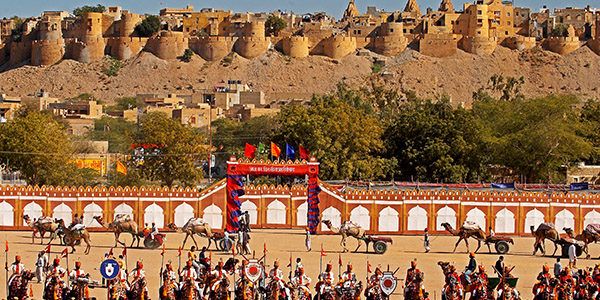 The Hindu festival of Teej is renowned by fasting of Hindu women who pray to Lord Shiva and Goddess Parvati, endeavouring their blessings for marital ecstacy. The festival of Teej is celebrated in the Hindu month of Shravana and Bhadrapada, that is sometime in the months of July, August, and September in the Gregorian Calendar. These months coincide with the monsoon season. The festival is celebrated by women to celebrate love and the union of marriage. Fasting is the highlight of the festival, however, women also celebrate it by engaging in fun activities like singing, dancing and laying on swing rides. The swings are hung on trees and many people place them in their courtyards and decorating them with flowers.

History behind the festival. 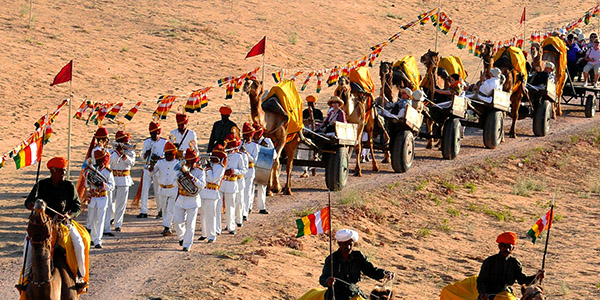 The Hindus have named the festival based on the insect called “teej” which comes out from beneath the earth’s surface in the monsoon season. The Hindu Mythology that supports the festival states that on the day of Teej, Parvati and Shiva made their union of love by becoming husband and wife. Parvati kept a fast of 108 years to show her devotion and allegiance to Lord Shiva after which he accepted her as his wife. There is another legend that states Parvati was born 107 times before her rebirth as Parvati, the 108th time; because of this she was granted the blessing of being Shiva’s wife.

HariyaliTeej is celebrated on the third day of the first fortnight of the Shravan month. Women pray to Goddess Parvati to ensure a longer life for their husbands. The festival is dedicated to the union of Lord Shiva and Goddess Parvati and is celebrated before Nag Panchami. It is a festival where married women fast and pray to the Lord for the well-being and long life of their husband. Unmarried women who want marital bliss and want a long life for their husband also observe the fast. The festival gets the name Haryali attached to it because of the greenery that the rainy season brings along with it.

This festival is known by various names like SataudiTeej, BadiTeej, KajaliTeej, and Nimadi Teej. This teej is celebrated in the month of Bhadrapada on the third day of Krishna Paksha, i.e. the dark fortnight. The KajariTeej falls in the months of July or August according to the Gregorian Calendar. The KajariTeej usually is celebrated sometime in between Raksha Bandhan and Krishna Janmashtami. The festival is celebrated with grandeur and enthusiasm in the state of Rajasthan, especially in the Mewar and Marwar regions. The fast observed on the day of Kajariteej is said to bring happiness and joy in the married lives of the women. Women also pray for the safe and long life of their husbands on this day.

Where to celebrate KajariTeej :- KajariTeej is popularly celebrated the northern places of Rajasthan, Gujarat, Madhya Pradesh, Uttar Pradesh and Bihar. On this day, people take off the celebrations and the merriments to extraordinary statues.

HartalikaTeej is observed on the third day of the bright half of the Hindu month of Bhadrapada. This day is believed to be the day when Goddess Parvati made the Shiva lingam from her hair and prayed to it. This act was noticed by Lord Shiva and he was impressed by her devotion that he decided on marrying Goddess Parvati. With her father’s blessing, Lord shiva and Goddess Parvati got married . This day is ever since celebrated as HartalikaTeej for the female friends of Goddess Parvati abducted her in order to get her married to Lord Shiva. The words Harit means abduction and aalika mean female friends and thus the combination of the two words makes the word Hartalika.

The best of dishes during Teej :-

Places to visit during Teej celebrations:

1) Rajasthan :-
Rajasthan is famous for celebrating Teej extravagantly and with full enthusiasm. There is a procession held on the Teej festival in Jaipur which goes on for two days and gains a lot of attraction from the masses. The Teej idol is covered while the Gangaur idol is open and visible to the people. Ghevar, a form of sweet is associated with the festival as many families make the dish and then distribute it. The idol of Goddess Parvati is worshipped. One day before HaryaliTeej, women apply Hena on their hands and eat various items. The swings are hung on the trees while women dressed in green clothes sing and dance around them.

2) Haryana :-
HaryaliTeej is celebrated widely in localities of Haryana. The Government organises functions in order to celebrate the festival. Boys and men fly kites the whole day. Although this tradition is slowly dying because of the skyscrapers that block the kites. The festival is observed as an official holiday. The mothers send a gift to the house of their daughters. Pujas are performed by many in the morning and then the gift or the baya is placed on a thaali at a place of worship. The chowks are decorated and there are idols of Goddess Parvati installed in most places.

3) Chandigarh :-
The administration of Chandigarh have many special arrangements made for the festival of Teej in the famous Rock Garden. There are cultural programs held and many school children also organise plays and skits to show the importance of the festival. The daughters of the family are showered with gifts and clothes.

To visit the famous Golden Triangle of India is on every traveler’s bucket list. To cover the sites like New Delhi, Agra, Jaipur and exploring the largest states […]