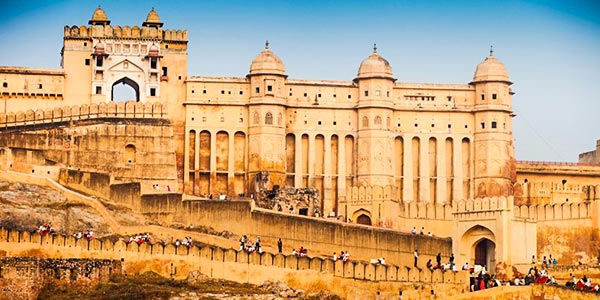 Recently India’s pink city, the walled city of Jaipur in Rajasthan got its name inscribed in the list of UNESCO World Heritage Sites. The city has managed to enter the list due to its iconic architectural legacy and vibrant culture. The announcement was made by UNESCO itself after the 43rd session of the UNESCO World Heritage Committee at Baku in Azerbaijan. During the UNESCO meeting, an official mentioned that the inspection of the city had been done in 2018 post its nomination for the title.

Explaining the reason behind its inclusion in the World Heritage List, UNESCO said, The fortified city of Jaipur, in India northwestern state of Rajasthan was founded in 1727 by Sawai Jai Singh II. Unlike other cities in the region located in hilly terrain, Jaipur was established on the plain and built according to a grid plan interpreted in the light of Vedic architecture. The streets feature continuous colonnaded businesses that intersect in the centre, creating large public squares called chaupars. Markets, stalls, residences and temples built along the main streets have uniform facades. The city urban planning shows an exchange of ideas from ancient Hindu and modern Mughal as well as Western cultures. The grid plan is a model that prevails in the West, while the organization of the different districts refers to traditional Hindu concepts. Designed to be a commercial capital, the city has maintained its local commercial, artisanal and cooperative traditions to this day.

The city serves as the capital of the culturally-rich state of Rajasthan. Moreover, it is quite famous all over the world for its one-of-its-kind features. Some of the famous tourist attractions include Hawa Mahal, Jantar Mantar (which happens to be another UNESCO World Heritage Site), Amer Fort, etc.

The UNESCO certification will help attract more funds for cultural projects and conservation initiatives in the city. Now that the city has become renowned globally, it will also attract more tourists as compared to earlier. Furthermore, it will benefit nearby regions like Ranthambore and Udaipur, hence it will give a boost to the local economy.