Mysuru Dasara - The victory of good over evil 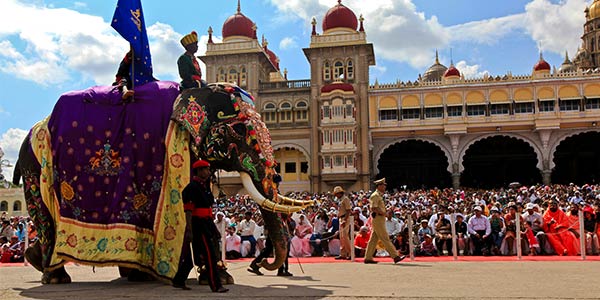 Mysuru Dasara is a Navaratri festival celebrated in the months of September or October. It is Nadahabba which means the state festival of Karnataka. It can also be seen as the Dussehra with a twist as it also marks the victory of good over evil. Goddess Chamundeswari (also known as Goddess Durga) of Chamundi Hill is honoured who killed the buffalo headed demon Mahishasur. It is Mysuru’s most popular festival and is celebrated for 10 days. The celebration is carried out by various processions, cultural activities, dance and music performances and torch light parade. The history of this festival goes back to over 400 years. 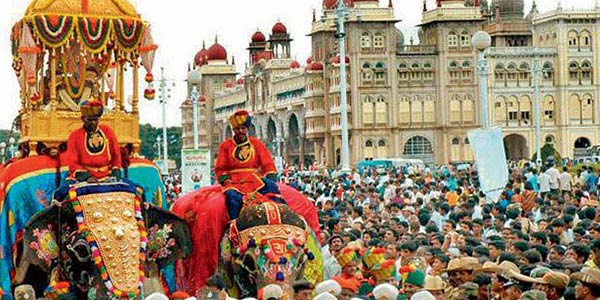 The festival like the regular Dussehra festival celebrates the victory of good over evil. Goddess Chamundeswari or Durga killed Mahishasur, a buffalo headed demon, in the Chamundi Hills. The slaying of the demon gave the name Mysuru to the city. The celebrations of this festival began at the time of Vijayanagar Kings in the 15th century. The relief artwork on the walls of Hazara Rama temple in Hampi shows the history of the festivities. Goddess Durga also known as Chamundeswari is known as the warrior goddess and is a symbol of strength and power.

The celebrations however came to an end for a brief period of time under the Muslim rule. However the Wodeyars still continued to celebrate the festival in their kingdom formed in the Southern parts of Vijayanagar Empire.

The festival started back in 1610 when Raja Wodiyar I and his wife performed puja to worship Goddess Durga in Chamundi Temple situated on Chamundi Hill. Grand processions started under the rule of Nalwadi Krishnaraja Wodiyar IV in which the king used to ride on a decorated elephant.

Where is it celebrated? 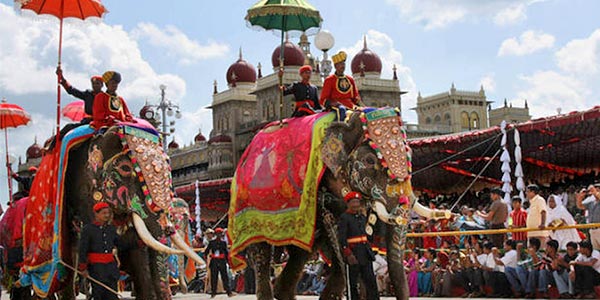 The festival is celebrated in Mysore, a city in Karnataka. The various locations where the celebrations take place include Mysore Palace, various auditoriums, exhibition ground opposite Mysore Palace, Chamundi Hill and Maharaja’s College ground. Various processions also enhance the beauty of the festival. 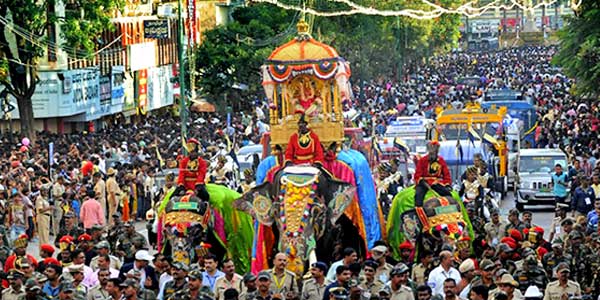 During the rule of Krishnaraja Wodeyar III, the tradition of conducting a special durbar (royal assembly) started. The assembly was attended by members of the royal family and various other officials. The tradition was again started in December 2013 after the death of Srikanta Wadiyar. A royal sword known as “Pattada Katti” is placed on the golden throne. It is then worshipped and carried on a procession on the ninth day with elephants, camels and horses giving the festival a royal look.

The famous festival is celebrated for 10 days when the entire city is glorified in the lightning and celebrations. The 10 days include Navaratri and Vijayadashmi.

Navaratri is a Sanskrit word which means nine nights. Nine different forms of Shakti/Devi are worshipped during these nine nights. The 10th day is referred as Vijayadashmi. It denotes the victory of good over evil.

Mysore Palace is illuminated with thousands of light bulbs at night between 7 p.m. and 10 p.m. on all 10 days of the festival. In front of the palace, various dance, music and cultural programs are performed highlighting the rich culture of Karnataka. A large audience is attracted from all across the world. The golden throne is also placed in the durbar hall for the public viewing.

Last day i.e. Vijayadashmi marks the end of the festival and is celebrated on a grand level. Jamboo Safari (traditional procession) starts from Mysore Palace at exactly 2.45 p.m., covering many streets of Mysore and ending at Bannimantap. The procession includes an idol of Goddess Durga or Chamundeshwari carried on a decorated elephant. Before taking the idol around in the procession, it if first worshipped by the royal family privately. Various music bands, dance groups, decorated animals and cultural troupes are a part of this procession. The Dasara festival comes to an end with an event held on the grounds of Bannimantap called as Panjina Kavayatthu or torch light parade.

Exhibition is another attraction during Navaratri which is held at the Exhibition grounds located just opposite Mysore Palace. The exhibition was first started by the king Chamaraja Wodeyar X in 1880 which a purpose of showing the various achievements and development of the city. The exhibition starts during this festival and ends in December. Various items such as clothes, plastic items, kitchenware, cosmetics and eatables are displayed on stalls for selling. Entertainment is also provided in the form of a play area containing the Ferris wheel. Achievements and projects are also displayed by various Government Agencies on different stalls.

The festival is the biggest celebration in Mysore and is an attraction worldwide.