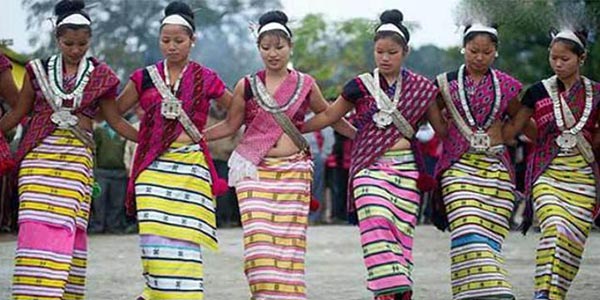 Arunachal Pradesh, also called The Land of the rising sun also or the “Land of dawn-lit mountains” or “The Orchid State,” this beautiful northeastern state has so much to offer to its people. With its mesmerizing and uniquely beautiful orchid species and breathtaking and enchanting landscapes, a lot is to be explored in this place.

The Tamladu Festival in Itanagar is one of the most ancient and popular festivals celebrated in the state of Arunachal Pradesh. This festival is celebrated in the district of Lohit in the northeastern state of Arunachal Pradesh by the tribe of the Digaru Mishmis. During this festival, one can witness the display of certain beliefs like supernatural, religious and cultural. According to the members of the tribe, it is only the nature that can protect them from various natural calamities like earthquakes or floods and so on. Jebmalu is the supreme god of the tribe and is worshipped for the welfare of the people. He is also worshipped for crops and domestic animals. Hence, during the Tamladu festival prayers are offered to mother nature.

The festival of Tamladu is celebrated on the 15th of February every year, and this festival brings joy and unity among the Digaru Mishmis tribe. The festival also spreads the message of joy and unity amongst the tribals. During the festival, you can see the Tanggong dance being performed, which is the tribe’s most popular traditional dance. If you are visiting Arunachal Pradesh, then Tamladu is a must-visit or must-see festival as it provides the tourists an opportunity to learn about the tribal people of Arunachal Pradesh and also to learn about likes and dislikes, their culture, their way of living and also to observe their beliefs and customs.

Tamladu festival is celebrated in the Lohit district in Itanagar in the state of Arunachal Pradesh is amongst the traditional festivals celebrated in the region. The festival presents a mesmerising environment as people from all across the district participate in the rituals. The tribals of the surrounding hills and valleys are very enthusiastic about participating in this religious festival or gathering.

The festival is a lifetime experience and is definitely worth watching as it gives us an outlook of the life of the tribal people of Arunachal Pradesh and also teaches us about their beliefs, values and virtues.

To experience this beautiful festival, you would have to travel to The Orchid Sate, and you can reach Arunachal Pradesh by air. Both airplanes and helicopter rides can be taken. Connections from Guwahati, Kolkata are also available. You can reach there by road as well by traveling through interconnected roads in Assam. Lastly, you can reach this beautiful place by taking the train from Harmuti Station in Assam.