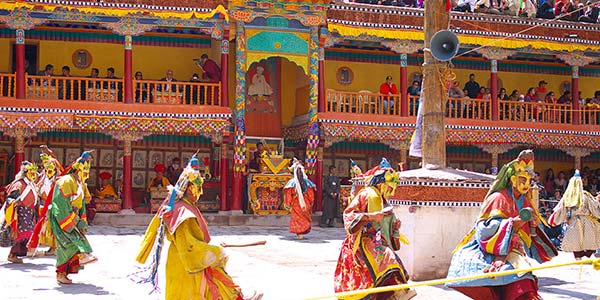 Hemis Gompa fair or Hemis festival is celebrated annually on the tenth day of the Tse-Chu month which is the lunar month of the Tibetan Calendar. It is celebrated for 2 days and marks the birth anniversary of Guru Padmasambhava. Buddha Shankyamuni predicted the birth of Guru Padmasambhava on the 10th day of the 5th month of the Monkey year. Various dance performances at the Hemis Monastery are the main highlights of the celebration. The festival also showcases culture and crafts of the area. The main events are held at the Buddhist monastery of Ladakh, Hemis Monastery. The cold area of Leh comes to life during this festival. 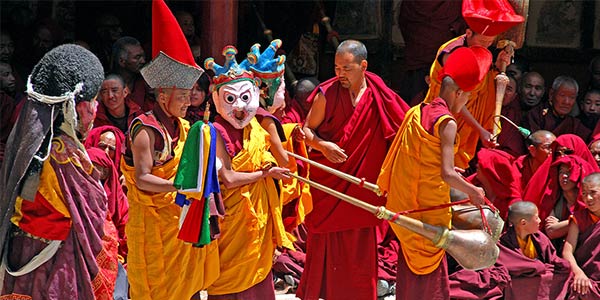 Hemis Monastery exists since before the 11th century. The monastery is the largest Buddhist monastery in Ladakh and is the main celebration location for the annual Hemis festival. The two day affair thus celebrated marks the victory of good over evil. It is believed that to protect his people, the Tibetan Buddhist founder, Guru Padmasambhava fought the evil spirits and demons. So the lunar month’s tenth date is celebrated as the Hemis festival which is the birth anniversary of Guru Padmasambhava. The fair is organised on the 9th and 10th of the fifth month of the Tibetan Calendar. The tantric Buddhism in Himalaya Kingdom is also believed to be introduced by Guru Padmasambhava.

It is also believed that the main aim of Guru Padmasambhava was to improve the condition of all living beings both physically and spiritually. The performing of various rituals and celebrations are believed to give strength and good health to the humankind.

A new way of attaining spirituality was achieved by combining Buddhism and Tibetan culture.

When is it celebrated? 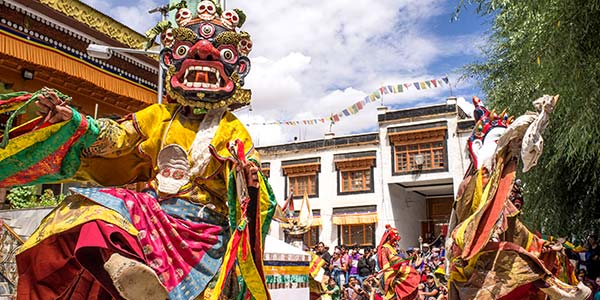 The celebrations take place on the 9th and 10th day of the fifth month of the Tibetan Calendar. This year the dates according to international standard calendar are 19th and 20th of July, 2019. The fifth month of Tibetan calendar is also called the Lunar month.

Where is it celebrated?

The majority of celebrations take place at the largest Buddhist monastery in Ladakh i.e. Hemis Gompa which has existed since before 11th century. The Hemis Gompa is situated 45 km way from Leh and a large number of programs are organised here attracting many tourists. The otherwise barren and quaint are of Ladakh comes to life during this festival celebration.

The famous culture and tradition of Ladakh along with such beautiful landscapes attracts a lot of tourists to visit this paradise. The Hemis Gompa fair also known as the Hemis festival is a popular attraction among tourists showcasing history and culture. It is one of famous Buddhist cultural festivals of Ladakh and a large number of tourists specially go to Ladakh for the sole purpose of attending this festival.

A colourful fun fair is held with a large number of stalls and shops. The festival also showcases the beautiful local handicrafts of the area. The festival also includes the dance of Lamas around flagpole to the music of drums, cymbals and long horns. Natives in the area also dress up in colourful costumes to show the joyful nature of the festival.

The highlight of the Hemis festival is the masked dance also popularly known as the ‘Chham Dance’ depicting the victory of good over evil. The amusing plays along with dance performances keeps audiences entertained throughout the celebrations. Monks wear long gowns, masks and head gears as per the traditions. The masks signify special message related to the culture of Buddhists history.

The head of black hat dancers destroys the sculptures made of dough representing evil powers. The pieces thus broken are thrown in four different directions. The rituals thus imply the warding off of evil spirits and purification of soul.

Various devil dances are also performed during the celebration. A local liquor named ‘Chang’ is also offered to the spectators and various participants.

The fair also includes exhibition of local handicrafts and various other items which are perfect to buy as souvenirs and gifts. The presiding person of the main event is the head Lama also known as ‘Rinpoche’. The 12th year i.e. the Tibetan year of Monkey adds even more tradition to the festival as largest thangka of Guru Padmasambhava is showcased which is as large as a two storey building.

The synchronization of dance and music and beautiful traditional customs together bring great joy and enthusiasm of the festival. The chham dancers not just perform but show the tantric traditions of Buddhism and thus becoming the primary attraction of the whole event.

The fair also include various unique handicrafts, Buddhist idols, Tibetan gems and jewellery and hand women clothes and dresses displayed on beautifully decorated stalls. Also the festival is celebrated during a time of the year when weather is perfect in Ladakh.

So this festival is perfect visit for all tourists seeking both cultural celebrations and learning a great deal of Buddhist learning.

Magnificent in its scope and alluring in the variety of experiences, Ladakh is the most amazing place to visit in the world. Sky-touching mountains that make up the region[…]